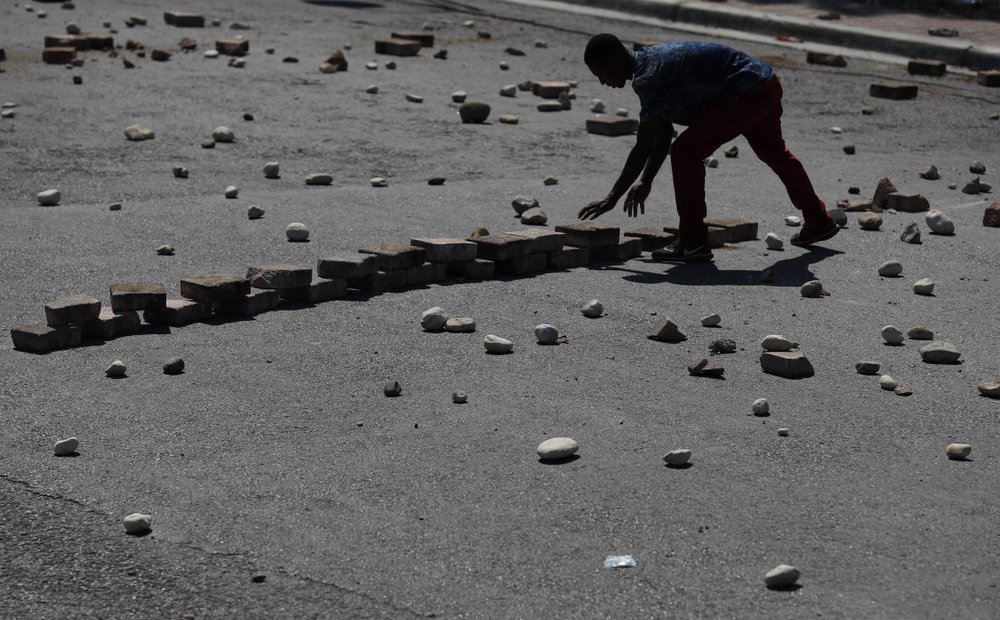 General. Riots can cause tremendous damage to capitalist power, and can raise the fighting spirit of poor and working people. Riots can politicize individuals, empower them, and alter their understanding of what is possible in the realm of resistance. More than any other aspect of revolutionary warfare, riots involve the largest numbers of people.

The Nature of Riots.

Section I – Know Your Enemy

Enemy Protective Gear. A fully equipped riot cop can wear up to 80 pounds of protective gear, including a helmet with a visor, shoulder and chest pads, upper and lower arm pads, thigh and shin guards, gas mask, baton, shield, coveralls, padded gloves, and boots. On top of all this, they wear a service-belt that holds a pistol, handcuffs, pepper spray, a walkie-talkie, etc. While all this material provides protection, it also limits their mobility. Constant moving and running can tire them out. On hot days, riot police can easily become overheated, especially if wearing gas masks. On the other hand, less equipped riot police may be more mobile, but they are more vulnerable to attack.

Tear Gas. Tear gas is technically a “non-lethal” riot-control agent, although tear gas has been known to kill people in unventilated spaces, and poses serious hazards to pregnant women and asthmatics. Various types of tear gas can be released from aerosol spray canisters, but can also be employed as projectiles that are either thrown by hand or fired from a launcher. Sometimes these devices function as tear gas grenades that explode upon impact or shortly after. When tear gas is fired from a launcher, it often sounds like shots are being fired. Do not panic; look up when you hear the shot and avoid the path of the projectile.

Tear gas projectiles can be neutralized by submerging them in a bucket of water. When touching tear gas canisters to neutralize them, or to throw or kick them back at the enemy, make sure that the device has already exploded (if not this can cause serious injury). Tear gas grenades usually explode within 5 seconds of landing. When tear gas canisters land they often continue to jump around on the ground, making it difficult to grab them. These canisters can be extremely hot, so they must be picked up wearing thick gloves.

Pepper Spray. Pepper spray can be released through hand-held aerosol spray canisters or as part of a projectile round (pepper balls). The enemy must be within 10-15 feet for aerosol spray to be effective.

Riot Control Tactics. The function of riot-control tactics may be to make arrests, to stop entry into certain areas, to clear a crowd from a certain area, or to form a passage through a large crowd. Some tactics to be aware of include:

Goals. The primary concern in a street riot should be countering the police; out-maneuvering them, disabling their vehicles, collecting and distributing projectiles, de-arresting people, neutralizing tear gas canisters, etc. Other important concerns may include administering first aid, inflicting damage to bourgeois institutions, expropriating resources from such institutions, evasion and escape, etc.

Principles. The enemy has a tremendous advantage in terms of resources and overall power. To compensate for this, rioters should avoid decisive combat with the enemy and instead rely on flexibility, mobility, knowledge of the environment, and political strategy.

Legal Support. As part of the planning process, take the time to coordinate with sympathetic lawyers, legal observers, and bail fund organizations who are willing to support people captured and harmed by the police. Locate community organizations that can provide bail and legal services and encourage people to write the phone number of these organizations on a piece of paper or on their body with a sharpie marker, so that they can call them in case of incarceration. If there isn’t already a local organization providing these resources, organize a fund to bail out arrestees and provide a phone number that people can call.

Mass Organizing. Riots cannot succeed in the long run unless they connect with struggles among workers, tenants, prisoners, and other movements. Before, during, and after the riot, insurgents should build political support for revolutionary tactics among as many people as possible. This can take the form of flyers, pamphlets, tabling, art, meetings, speaking at rallies, etc. Insurgents and their supporters doing this kind of political work should be careful to conceal their connections with the revolutionary underground.

Units. As isolated individuals, rioters are much more vulnerable to arrest and far less capable of carrying out actions. For this reason, rioters should organize themselves into small teams, or units. Depending on the circumstances of the riot and the plan of action, units can be as small as two people or as big as six or more.

Reconnaissance of the Riot Area. If the riot zone is known or estimated beforehand, a reconnaissance mission should be carried out to study the physical terrain, potential targets, obstacles, danger areas, entry/escape routes, etc. Make a mental and physical map of the area. The identification of routes in and out of the riot zone is especially important. These include side streets, alleyways, malls, vacant buildings, residential areas, trails, forests, etc.

Rallying Points. Identify one or more rallying points in case you get separated from your unit. Rallying points should be established outside of the riot zone and should provide concealment, or an excuse for loitering, such as a park. Designated times should be made for vehicle pickup. A method of signaling should also be devised, for example, whistling or the flashing of headlights.

Clothing. The best defense against identification and later arrest is a good mask that covers most of your face, including your forehead, like a ski mask, or Balaclava mask, a makeshift shirt-mask, or a combination of items, like a hoodie, a baseball cap, and bandana. Try to cover as much skin as possible; wear pants, long sleeved shirts, gloves, etc. Wear clothing with uniform colors in order to limit the ability of police surveillance to identify and track you. Do not wear clothing with logos or insignia. Wear different clothing as an under-layer to the riot uniform. This way, the outer uniform can be quickly removed and discarded to make you appear like a bystander. Be careful about where you change your clothes/take off your mask.

Protective Gear for Chemical Agents. The first indicators that chemical agents will be used are: the sight of spray canisters in police hands, cops putting on gas masks, and/or the positioning of gunners to launch tear gas. If there is the potential for exposure to chemical agents, and protective gear is not already being worn, it should be put on immediately. During the planning stage, remind people to not wear lotion; it absorbs pepper spray and other chemicals. (For first aid techniques, see First Aid for Tear Gas and Pepper Spray.)

Neutralizing Tear Gas. When tear gas canisters are thrown or fired into your area, you can kick them back at the police or use thick gloves to pick them up and throw them back at the police. However, sometimes tear gas canisters can explode upon impact or shortly after, so wait 5 seconds before picking them up. You can also submerge the canister in a bucket of water to neutralize the tear gas (mix 3 tbsp. of baking soda per liter of water). Other techniques include: spraying tear gas with a fire extinguisher until it goes out; covering tear gas with a traffic cone (with the tip cut off) and pouring water mixed with baking soda into the hole.

Moving Through the Streets. Take an easy pace, and don’t run unless absolutely necessary. Make sure to stay with your unit at all times, especially when leaving the riot area. Don’t let yourself get cornered; do not engage in stationary warfare. When moving through traffic, go in the opposite direction of traffic (it’s harder for the police to follow).

Moving Through Large Crowds. At times, crowd density may be so great as to limit movement as a unit. To move through a thick crowd as a team, place one hand on the shoulder of the person in front and do not allow the chain to be broken. Move in single file. If you are detached from your unit, call out the unit code-name to alert team members.

Withdrawal. Always identify and recheck your exit route. Rioters cannot hold a fixed location for long before enough enemy reinforcements arrive to overpower the rioters. By this time the rioters should have already dispersed and moved on to another location. Depending on the situation, it might be necessary to fight the enemy in order to escape (to this end, insurgents should practice escaping from arm holds and locks). At the first secure point (i.e., sheltered from any police observation or video surveillance), rioters should remove their outer layers and protective gear and dispose of all their riot gear (preferably in a hidden location). Rioters should fix their hair and overall appearance and review their cover story (explaining what they are doing in the area, their destination, etc.).

Resisting Containment. When the police encircle a place where rioters are gathered, people must not give up. Look for openings and irregularities in the police line and concentrate forces there in order to break out of the encirclement. Prioritize helping non-combatants escape, especially children and the elderly.

Launching Projectiles. Despite their heavy armor, police are vulnerable to the accumulated physical and psychological effects of projectiles. Primary targets for projectiles are: commanders, snatch squads, K9 units, and gunners who fire tear gas, rubber bullets, etc. In the absence of a police presence, other targets include corporate businesses, government buildings, etc.

Projectiles should be launched from the front of a crowd, never the rear. This is to prevent injury to the front ranks should your throw be too low or short. Projectiles should be aimed at single targets, not just thrown at a mass. Targets directly in front of you may see your action and avoid the projectile. Throw at an angle that is to the left or right of the target and you will more likely catch a riot cop off guard.

Looting. Looting is the taking of material resources from offices, stores, warehouses, etc. Looting should be planned if possible, with targets and methods of gaining entry pre-selected. Insurgents should bring the tools they need to gain entry (i.e., crowbar, sledgehammer, bolt cutters, etc.). Careful reconnaissance of the target area beforehand will provide crucial information. It is also important to devise a plan for covertly getting looted goods out of a riot zone.

First Aid. Every riot force should have a unit in charge of first aid. First aid for riots should stress treatment for:

Incarceration. If incarcerated during large riot situations, the normal routine of processing (fingerprinting, photographing, etc.) may be prolonged due to the large numbers of arrests. Special detention centers may be set up (in abandoned military bases, warehouses, etc.). If you are injured medical assistance may be delayed. When large numbers of prisoners are held, it is easy for undercover police to pose as fellow prisoners in order to gather information.

Debriefing. After a riot, like any insurgent action, it is necessary to debrief as soon as it is safe to do so, in order to review the action and conduct, what worked and what didn’t, how things could be done better, to share what each unit member observed and experienced, etc. The more time that passes from the time of the action to debriefing, the less detail will be remembered.